We started the celebrations with beautiful bhajans followed by Swami’s discourse on the mysteries, leelas and great miracles of Lord Krishna.

We then had the pleasure of the company of the brothers and sisters from Leicester ISKCON Centre. Firstly, the sisters sang kirtan and then brother Priyadarshan Prabhu spoke about Lord Krishna and His glory.

He mentioned that in many religions, God sends Prophets and Saints to earth to spread His message. However, in the Vedic tradition, the Lord Himself appears in human form. This is a unique aspect of Sanatan Dharma. In the Bhagavat Gita, Lord Krishna says to Arjuna that when there is a decline of righteousness, God will come again and again to re-establish dharma (righteousness). He also said that God incarnates to rid the world of demons.

Brother Priyadarshan Prabhu mentioned that when the Lord incarnates on earth in human form, we are able to interact with Him, know His sweetness and He is able to reveal His glory to one and all. Furthermore, He does not come alone. He brings His entourage; His mother, father and friends. Lord Krishna was a Poorna avatar, meaning that there is nothing higher than Him, He is the Supreme Absolute Truth.

God also appears in human form so that we can know Him and be attracted to Him. The meaning of Krishna is ‘the most attractive’. He was attractive even to the demons.  We discover that the demons also attained Krishna after death, because they were thinking of Him in their last moments and they saw Him. When Krishna was 6 days old, He killed the demoness Putana. She attained Krishna after death because she was thinking of Him constantly and He was the last thing on her mind before she died. The soldiers who died in the Kurukshetra battle also attained Krishna, because they also saw Him at the end of their lives.

Brother Priyadarshan Prabhu spoke about the human birth being very important. A human being can ask the questions; who am I? Who is God? How do I establish my relationship with Him? This makes us different from all other creatures, because we have the intelligence to ask these questions. If we were not able to ask these questions, we would be no different to all other creatures on earth. We would live merely to eat, sleep, procreate and defend. Foolish people do not understand the human form and its sacredness. However, there is one good thing in the Kaliyuga, and that is namasmaran. Namasmaran is very important because everyone can do it anywhere. By chanting the name of God, you too can attain Him and try to understand Him.

After the wonderful talk by Brother Priyadarshan Prabhu, all members of the congregation were invited to perform Joola darshan, followed by aarti and closing payers. 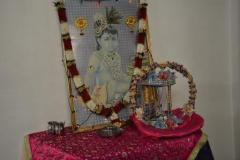 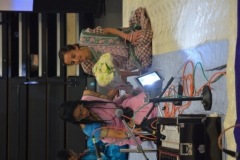 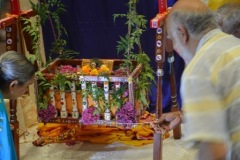 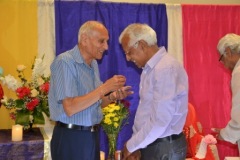 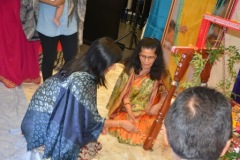 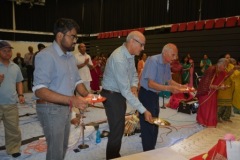